With the hustle and bustle of the 2016-17 school year now in the rear view mirror I find myself with time to catch up, take a breather and relax briefly prior to 2017-18 ramping up in full force in a matter of weeks. Time increases rapidly – and certainly never seems to slow down.

I just completed my 12th year in public education. From my humble beginnings as a first year teacher in small town Ohio to relocating very early in my career to the great unknown of the Triangle region of North Carolina, to obtaining my graduate degree in school administration and taking on leadership roles within the school I’ve always been invested heavily in relationships. Student to student, staff to staff, school community stakeholders, the list goes on. They’re genuine and ongoing as I’ve referred to in previous posts, its vital we are sincere as all those we serve, especially the kids, can spot a phony in an instant. Words and sincerity matter. Period.

This has always been my hallmark. Long before “relationships” became a buzzword in our profession. Long before my connections and eventual school partnership with Angela Maiers and Choose2Matter. Certainly before I met Mike Erwin and became involved with the Positivity Project beginning this past school year.

At times we lose focus of how much our words matter. The students we all serve listen and hang on every word we say. As a younger 3rd grade teacher back in 2007-2008 I began branching out beyond the walls of my classroom. It was my third year teaching and I wanted to begin taking a bigger role. Looking back it was one of my first risks as a young, wide-eyed educator. I took time to get to know other students on the grade level outside of my classroom, their parents, getting to know them beyond student A, student B, etc. Having check-ins at lunch, or on the playground. The mentality shift from my students to our students had begun for me officially.

A month ago, that “wave” of third graders from my first elementary in Raleigh graduated from high school. In the months leading up to the big day I was amazed how many of these former third grade parents & students began reaching out to me via social media, phone, work email, etc. to ask for my address. They almost all had the same sort of blanket message “Mr. Fetters you made such a big impact on me/my child a decade ago we’d love for you to attend my/their high school graduation.” All told I received 10 invitations this year. Some were students I had in class, several were those I never taught but got to know through weekly check-ins. They were our third graders – clearly I made an impact.

I was able to attend a high school graduation this year that the bulk of students from my original WCPSS elementary school attended. Most of the students that invited me were there. It was amazing to see so many of them, hear of their accomplishments, aspirations, while also making me feel quite old in the process.

I was able to attend one graduation party that day, a girl who I didn’t have as one of my students, but of course she was ours. Her mother reached out to me repeatedly and really wanted me to come to their house afterwards so I did. This young lady is incredible. Her exact words to me were “you always said you believed in me when I was in third grade – not a lot of people did but I knew you meant it. I wanted to prove you right.” I was taken back. Do words matter? Absolutely. Sincerity? Absolutely. This young lady has gone to places many never thought she would go. She’s going to move mountains. Just a small sliver of the impact we can and often do make on a daily basis within the profession regardless of our capacity.

These students have inspired me as much as I inspired them years ago. So powerful. Such an opportunity for rich reflection.

Its easy to get caught up in the moment as educators. We all have tough days and the work we do is challenging. It truly takes a village. We all have a lot going on in our personal lives, career, homes, etc. but its essential we keep doing right by kids as the pinnacle of every decision we make as an educator. That should always be a nonnegotiable.

Jimmy Casas (@casas_jimmy) speaks often to the power of the “three Rs” relationships, relationships, relationships. So true, both in education and life without a solid relationship foundation what do we really have? Nothing. While relationships have become a buzzword lately it’s imperative these are genuine and not just “going through the motion” by “checking off the box.” The students we all serve can spot phony in a nanosecond. When we are truly invested in them as individuals far beyond mere data points, they know.

If you see my Twitter feed enough you know I send out daily motivations often early in the morning. Monday – #CelebrateMonday created by my pal Sean Gaillard; Tuesday – #TootlingTuesday created by my friend and district colleague Renee White; Wednesday – #WednesdayWisdom; Thursday – #ThoughtfulThursday; Friday – #FF (Follow Friday); Saturday – #SaturdaySpark and Sunday – #SundayMotivation. All of these daily tweets are designed to provide positivity in some fashion. Celebrating the great aspects of the school, regognizing district colleagues going above and beyond, inspirational quotes or sayings, providing PLN educators who might be beneficial to increase their personalized learning, the list goes on.

How do you react when the wind speeds increase? #ThoughtfulThursday pic.twitter.com/xFT8uCX76v

What do see when you look around? Compassion and humility are invaluable character traits. #OtherPeopleMatter. #SundayInspiration pic.twitter.com/P2gOaTKqLL

While daily tweets of inspiration, praise and thought are one thing how do we put relationships into action. Enter my work with two projects at both the elementary and middle school level.

In 2011, when I was new to Twitter one of the first interactions I had on a “global level” (educators beyond my district and state level) was Angela Maiers. Angela had just rolled out her You Matter initiative and I was blown away.

Her work inspires me greatly and through bringing her You Matter movement to my previous school caused me to blog about the experience which led to a conference call with Angela, myself and school stakeholders. Angela’s overarching work and her Choose2Matter organziation (http://www.choose2matter.org) transformed the student and staff culture at Wendell Creative Arts and Science Magnet Elementary  and I’m so grateful for the opportunity Shane Barham afforded me to bring this initiative to his school.

When I transitioned curriculum coaching roles within our district from elementary to middle school levels one of the areas of attraction that led me to Carroll Leadership in Technology Magnet Middle School was the school had recently integrated the Positivity Project (https://posproject.org) I immediately saw the deep value in relationship as well as clear positivity of the initiative.

What was even more powerful once I arrived at the school was the ability to intertwine Positivity Project (P2) with our Leader in Me/Seven Habits which is part of of our magnet theme. Amazing, right? Excited to see where this program takes our school in 2017-18. 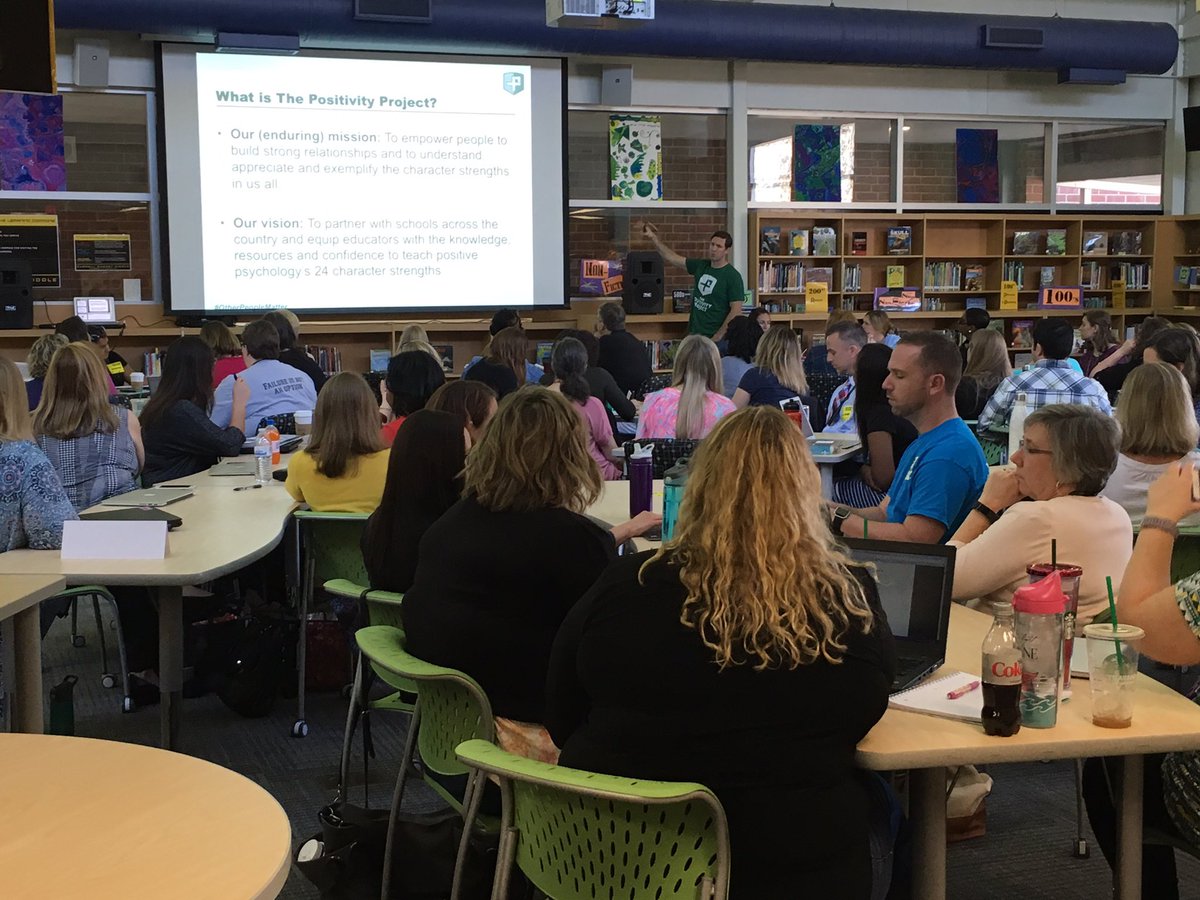 While all the inspirational tweets, blogs, initiatives, and are talk have great power none of these have true value or merit without genuine, ongoing relationships. Relationships with students, staff and community stakeholders. How are you doing in that department? Remember, the students we all serve can spot the artificial quickly. Be honest, reflect, improve. We all can. We are better together. After all, #KidsDeserveIt.
Follow BrendanFetters.com on WordPress.com